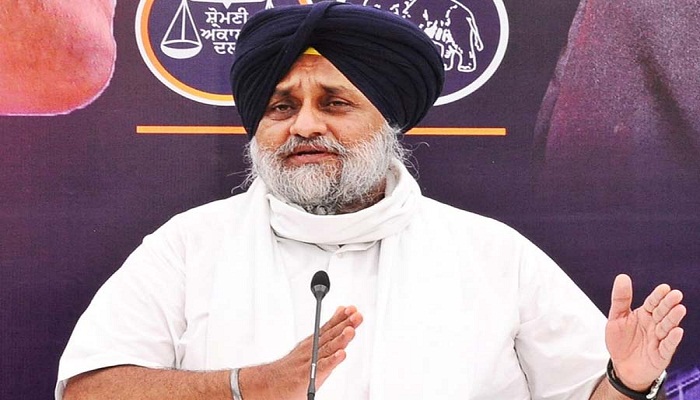 Chandigarh: The Akali Dal has taken serious note of the situation arising out of the implementation of black law and what is happening to the farmers in Lakhimpur Khiri. Mr. Sukhbir Badal has convened a meeting of the Emergency Core Committee and asked the Union Government to withdraw all the three agricultural laws. Mr. Sukhbir Badal said that so far a large number of farmers had sacrificed their lives which was strongly condemned by the Akali Dal.

At the same time he targeted the Congress and on CM Channi Sukhbir Badal said what kind of CM is he who does not have the power to appoint even DGP. No one in the Congress considers Channi Sahib as the Chief Minister. On the other hand Congress MLA Balwinder Ladi had to flee from a rally due to protest, Mr. Badal said that he was appealing to the farmers to fight with the Center and not among themselves.

Mr. Sukhbir Badal said that the core committee had expressed concern over another issue that as the Delhi government was tampering with Sikhism in which Sikhs have been made Gurdwara Parbandhak Committee in the midst of the Act, efforts were being made on behalf of the Delhi government. What is being done is that the elected candidates are being pushed back. Manjinder Sirsa’s nomination was rejected and said that if he did not know Punjabi, the committee formed by his court said he knew Punjabi. Now the police are pressuring him to break up the members of the Gurdwara Committee. . He did not nominate the Singh Sabhas who won the lottery, but nominated them by fielding fake people.

The post What kind of CM of Punjab Congress does not have the power to appoint even DGP: Sukhbir Badal appeared first on Daily Post Punjabi.