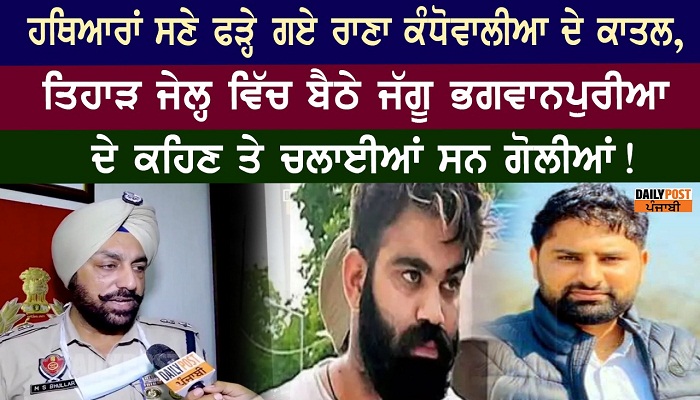 Police have arrested three accused, including the main accused in the gangster Rana Kandowalia murder case, who helped them after fleeing. The main accused has been identified as Guminder Singh alias Happy Shah, a resident of Batala. On the other hand, Mehta resident Gurpreet Singh alias Gopi, who helped, was arrested from Gagar Bhana village in Batala. Ladi and Dera Baba Nanak resident Naneet Sharma are also under arrest.

The main accused are Jagroshan Hundal, Happy Shah, Mani Raiya and Mandeep Singh alias Toofan. Apart from these, three accused were from Haryana, identified as Monu Dangar and Deepak alias Dipu. Kandowalia’s aide Tejbir Singh Teja also retaliated during the firing, in which Happy was injured. The accused had helped Happy get treatment.

Some of the accused have been identified as Gopi, Nanish, Kharak Singh alias Ladi, Sukhraj Malli, Jagtar Singh, Prabhjot Chatha and Varinderpal Singh Vicky. At the moment they are all hidden. At the same time, the police are investigating the matter of treating the hospital administration and not informing the police.

Coordination between gangsters in Haryana and Punjab has become a matter of concern. The DCP said the accused had been plotting to kill Rana Kandowalia for a month. Abroad, Jaggu Bhagwanpuria and Goldie Brar also lent their support. Goldie Brar brought the three shooters in contact with Jaggu from Haryana. Weapons for the crime were also brought by Haryana gangsters.

Happy Shah told police that all the accused had made the first attempt to kill Rana Kandowalia on July 31. At that time Rana was near the gym on Ranjit Avenue but the police PCR car was parked nearby. After this, Rana was chased to KD Hospital but he was accompanied by many boys. So they all went back but when they got information about someone being admitted to KD Hospital and going there daily, they carried out the incident.

The post The killers of Rana Kandhowalia, who were caught with weapons, were shot at the behest of Jaggu Bhagwanpuria, who is lodged in Tihar Jail. appeared first on Daily Post Punjabi.