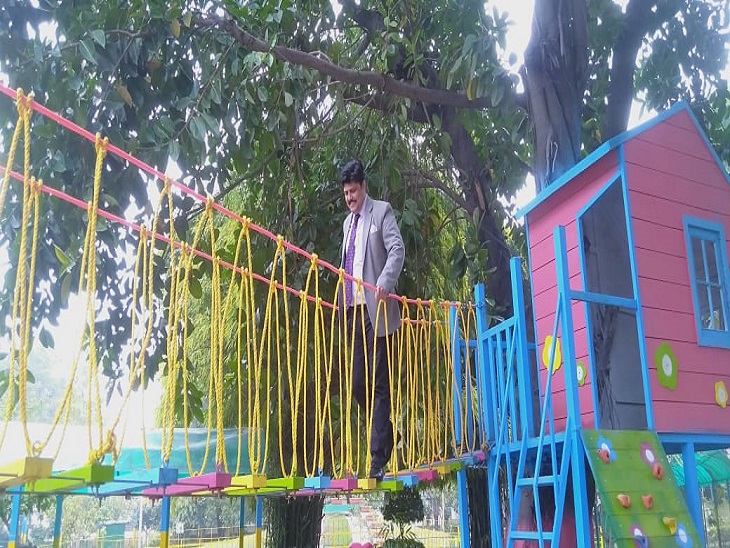 Children’s favorite Nikku Park in Jalandhar city, which has been closed for a year, has started blooming once again. Due to the Corona epidemic, the machinery which was closed in the park has started to be maintained again. Not only this, the district administration has constructed Burma Bridge in the park for the entertainment of the children. Children will learn to walk on this bridge made of ropes by balancing themselves. This bridge was connected with two cottages.

In the absence of the Deputy Commissioner, Jalandhar, it was inaugurated by Amit Sareen, ADC of Nawanshahr and former Assistant Commissioner of Municipal Corporation, Major (Retd). In fact, this Burma Bridge was built by Major Sarin during his tenure in Jalandhar and today he himself inaugurated it.

Let us inform that Nikku Park, built on 4.5 acres in the middle of the city, was in a dilapidated condition due to lack of handling due to Corona epidemic for almost a year. After taking stock of the condition of the park, the Deputy Commissioner released financial assistance of Rs.12 lakh.

Nikku Park manager SS Sidhu said that all the main swings and rides of the park, including amusement bus, fountain, train, flood lights, break dance swing and cricket bowling etc. have been made operational recently. He said that now this new Burma Bridge will become another center of attraction in this park.

The old glory of the park will be restored again

Deputy Commissioner Jalandhar Ghanshyam Thori said that he was committed to restore the glory of this famous and favorite children’s park of the city. He said that Burma Bridge has been built for children in Nikku Park, its cost has come to 7 lakh rupees.

Deputy Commissioner Thori said that while the new Burma Bridge will enhance the attraction of the park, the administration is providing many entertainment facilities at affordable prices. The DC said that Rs 12 lakh is being spent on the maintenance of the park.

Several initiatives are being taken to change the look of the park. He said that painting on the walls, CCTV cameras, re-operation of closed rides and swings, installation of cricket bowling machine and many other works have already been ensured.

what is burma bridge

Burma Bridge is a rope bridge. It is hung at the height of the rope bridge. Along with rope, old tires and wooden sticks have been used. This bridge swings in the air and children learn to walk by holding the rope on it and maintaining balance. Colorful cottages have been built at the end points on both sides of the bridge where children can enjoy themselves.

There is more news…