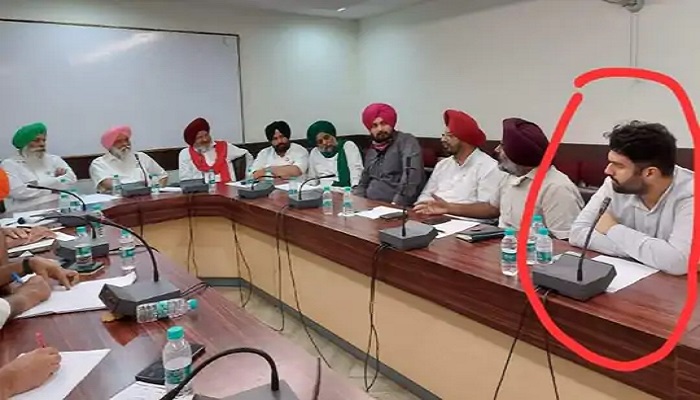 Only those leaders whose names had already been given were allowed to attend the meeting with the political parties at the invitation of the United Kisan Morcha. Sharing this photo on a page called ‘Akali Malwa’ on social media, it was written that this was an official meeting of the Congress party with the farmers unions or was it a separate meeting of the farmers with PPCC President Sidhu? If this meeting of farmers was only with political parties and their representatives, under what authority did Sumit, a special relative of Sidhu, attend?

It was also written in the post that earlier the captain had eaten snow and now Sidhu may not have gone to arrange snow with his entire family. It may be recalled that after the Punjab government had increased the rate of sugarcane in the state by Rs. 50 per quintal to Rs. 360 per quintal, the farmers leaders fed sweets to the Punjab Chief Minister Capt. Amarinder Singh in Chandigarh. Opposition parties have since described the statewide protests over the sugarcane rate as a deliberate strategy by the Congress.

After differences with Punjab Chief Minister Capt Amarinder Singh during the 019 Lok Sabha elections, Sidhu resigned from the Punjab Cabinet and launched his YouTube channel ‘Jitega Punjab’ almost a year later. Sumit watches all Sidhu’s IT related activities through this channel. Sumit graduated from the famous Punjab Public School (PPS) in Nabha. It may be mentioned here that the PPS status of Nabha is considered to be equal to that of Sanawar School in Punjab.

Hearing in the High Court over the arrest of former DGP Saini, the family also filed a petition
Big decision of Punjab government for NRI's, this law made for land
On CM Channi's UP visit, Yogi said this on the situation in Kasya Tanj, Punjab.
The country's first radiation detection equipment at the Attari border will conduct X-rays of trucks...
Post Views: 53