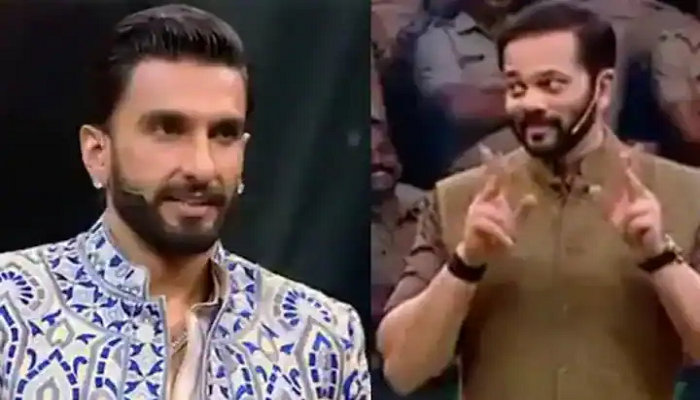 The film stars Akshay Kumar and Katrina Kaif in the lead roles and Ranveer Singh will be seen making a cameo in the film. Recently, a promo of the show has surfaced in which Rohit gets nervous while answering a question. Rohit says that if he does not answer the question correctly, his reputation will be at stake. Rohit says it would be a great disgrace if the answer did not come. Ranveer said yes, yes it is true, it will be a disgrace, you have to give the right answer.

Rohit says you are putting pressure on me. You have to help me. Ranveer “I can’t do that because I don’t have permission,” he said. On hearing this, Rohit jokingly threatened Ranveer and said, “Look, it has not been released yet. In addition, Rohit imitates the use of scissors with his own hands and hints that he is from Suryavanshi to Ranveer. Role Will cut. Hearing this Ranveer says – no no no.

Let me tell you that ‘Suryavanshi’ directed by Rohit Shetty is going to be released on November 5 on the occasion of Diwali. It is a cop drama film in which besides Ranveer, Ajay Devgn will also be seen making a cameo. The film was supposed to be released in March last year but due to Corona, its release was stalled for a year and a half.

Kriti Senan with her new avatar won the hearts of the fans, look at the red couple
Surya's 'Jai Bhim' entry in Golden Globe Awards, the film remains in controversy
Jhanvi Kapoor's killer look in red lehenga choli, stole the hearts of fans from pictures
In Pics: Alia Bhatt's sister-in-law is very beautiful, gives competition to heroines in terms of gla...