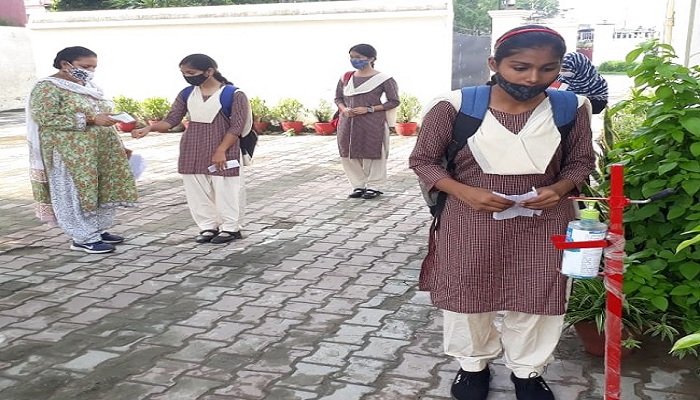 Chief Minister Yogi Adityanath’s entry into mission mode against the growing global pandemic corona virus has had a huge impact in Uttar Pradesh. In Uttar Pradesh, people have been given relief from time to time due to low infection. In this order, secondary schools are open from Monday. On Monday, students in classes 9th to 12th have been admitted to schools with the Covid Protocol. Absenteeism on the first day is very rare, but with the school reopening after about seven months, the children are very excited.

In Uttar Pradesh, from Monday, students from 9th to 12th classes have started attending school in all districts, including the capital Lucknow. So far, students who have been studying in online mode for about seven months will now study in offline mode. Teaching has been started in all the districts in just one session. Some schools are open from 8 a.m. and some from 7 p.m. Attendance was very low in all the schools of UP Board while the attendance in English medium schools was good only after the students with sanitizer and thermal scanning were allowed to enter the school.

When the school reopened about seven months later, there was a lot of excitement among the children. All students attending the school were admitted after showing their parents’ consent after cleaning their hands with thermal scanning and sanitizer. Children also remember to bring masks and sanitizers. Meanwhile, school principals and teachers were present at the main gate. There was some fear among the students of corona infection, some were also seen scared. In the joy of opening the school and seeing friends again, he was seen moving forward, leaving behind bad memories.

During Corona’s time in the state, offline education also became Shri Ganesh. Most schools only open at 8 am. All Corona guidelines were observed to be strictly followed. Admission was given only after checking the temperature of the children at the school gate. In addition, sanitizers must be made available to every child. The school management is very careful. No children, staff or teachers are allowed inside without masks. Physical distances are also being observed in classrooms. Classes will run from 8 a.m. to 12 p.m. At the same time, parents have been assured of readiness from Corona.

Today more than 1 lakh 59 thousand new cases of uncontrollable corona have been registered in the co...
Will the Congress government continue even after the Punjab elections? These shocking figures came ...
Brigadier LS Liddar's body brought to the crematorium, will be cremated shortly
Intensified battle between Congress and Twitter, Srinivasa changes his account name, Priyanka posts ...
Post Views: 160