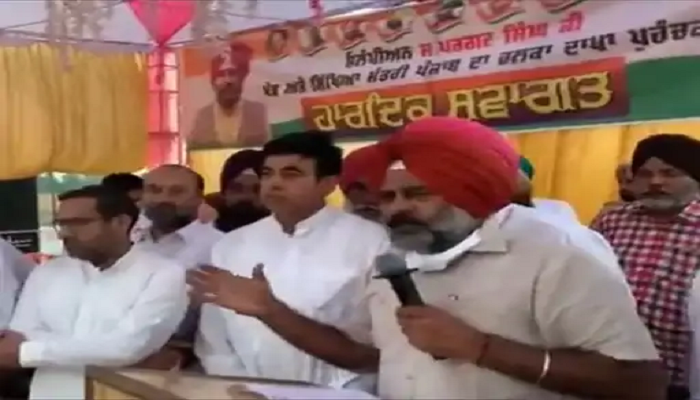 Pargat Singh had repeatedly alleged that he had been threatened by Sandeep Sandhu. Captain Sandhu was considered close to Amarinder but Sandhu did not respond to Pargat Singh’s allegations. As Capt Amarinder Singh resigned from the post of Chief Minister, Sandeep Sandhu also resigned and there was talk that Sandhu would now be with Capt Amarinder in his difficult times and be part of Amarinder’s new party. Sandhu surprised everyone when he appeared at a press conference with Punjab Deputy Chief Minister Sukhjinder Randhawa.

The second surprise came when Pargat Singh, who had accused Sandeep Sandhu, arrived in his area to hold a rally. Pargat Singh said in the rally that Captain Sandeep Sandhu was tied to a system, so he was saying the same thing. It is clear that he was hinting at being an advisor to Amarinder Singh. Pargat said that even Sandhu’s heart was beating for Punjab. Pargat said that sometimes something seems to happen from the front and in reality something else happens. He also explained to Sandhu the reason for joining his group from Capt. Amarinder’s group. Pargat Singh did not miss targeting Amarinder here either. “I have been saying for two and a half years that Amarinder is implementing the BJP agenda,” he said.

The post Rally in favor of Captain Sandeep Sandhu who was accused of intimidation by Pargat Singh appeared first on Daily Post Punjabi.

PUNBUS AND PRTC EMPLOYEES STATE ALL BUS STANDS IN PUNJAB FOR 2 HOURS, STRIKE FROM SEPTEMBER 6
Eligible individuals can apply for a new vote from this date, find out what the process is
Youngsters break into house under the pretext of taking cylinders, two lakh looted
Amarinder Singh danced to BJP's tune and now Channi is doing the same by handing over half of Punjab...
Post Views: 73