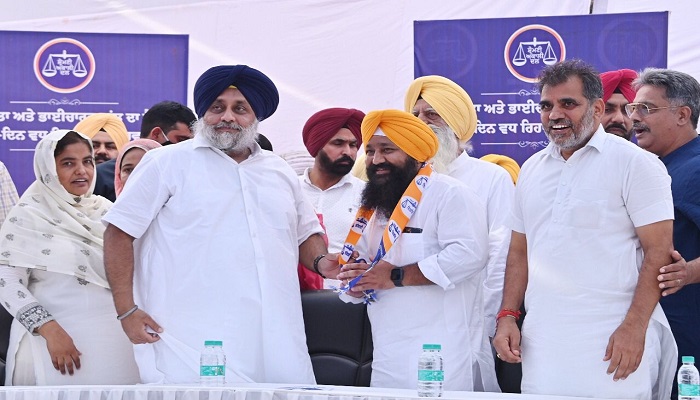 CHANDIGARH: The Shiromani Akali Dal (SAD) got a major boost in Mohali constituency today when former Laborfed Managing Director Parvinder Singh Sohana rejoined the party along with several senior leaders from the area.

Speaking on the occasion Mr. Sukhbir Badal said that Mohali had emerged as the leading city of North India during the last Shiromani Akali Dal led government. During our government, Mohali had all round development.

From an international airport to an expressway and bringing in world-class organizations such as the International School of Business (ISB) and IT powerhouse Infosys, we laid the foundation for making it a world-class city. Unfortunately the Congress government did not include a single project in Mohali. In fact, it could not even ensure the maintenance of the city.

Mr. Mr. Badal also lashed out at the former Health Minister Mr. Balbir Sidhu for which he said that he had done nothing for Mohali but looted its resources by occupying the Panchayat land to set up a commercial trust.

He said that Sidhu was also involved in the scam of procurement of kits during the Kovid epidemic and also in the drug pill scam. He said that after the formation of SAD-BSP government the former ministers would be held accountable for all their corrupt activities in the state.

The Akali Dal president sharply criticized Aam Aadmi Party (AAP) convener Arvind Kejriwal saying that he was trying to fool the Punjabis when he failed to implement any of his promises in Delhi.

He said that Delhi was one of the most expensive states in the country. Even a free facility with a condition of 200 units is a deception as it only applies if the consumption is less than 200 units.

Mr. Badal also mocked the guarantees being given by Mr. Kejriwal in Punjab saying that he did not have a single Punjabi who could give any guarantee from his party as he knew that none of the promises made by Mr. Kejriwal were fulfilled. Will be done.

Also read: CM Channy has taken a big step to curb the influx of paddy from other states