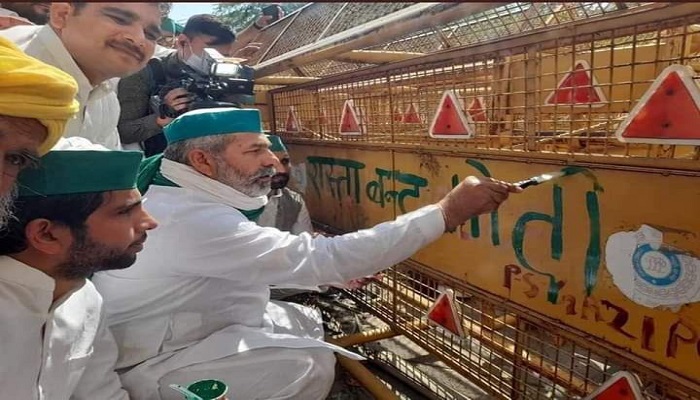 A day after the tarpaulin was removed from the tent at the Ghazipur border, Bhartiya Kisan Union spokesperson Rakesh Tikait and other farmers on Friday painted the Delhi Police barricade with the words ‘Modi government responsible for the barricading’. “Modi government paves way,” he wrote on the barricading.

On Thursday, BKU spokesperson Rakesh Tikait removed the tarpaulin from a large tent in the service lane of NH-24. The tent has been part of the Kisan Andolan since November 26, 2020, which previously housed a media center and a langar.

Rakesh Tikait says he wants to go to Delhi. Police have barricaded their way. The police removed the barricades so that they could go to the Parliament House and make their case.

Also read: Before the captain came, Arusha was the deputy in the case. M. Correct answers given to Randhawa

Let me tell you that for the last 11 months, the Supreme Court has also expressed concern over the closure of Delhi’s borders. The apex court had on Thursday said that farmers could agitate but could not stand in the way. Rakesh Tikait has removed the tarpaulin from the tent and wants to tell the Supreme Court that the road has been blocked by the police.

PM Modi may visit US this month, will have first meeting with President Biden
Banking from December 1, including EPFO ​​are going to be 5 big changes, read full news
Ashish Mishra will appear before the Crime Branch today in the Lakhimpur Khiri incident case
BJP's fourth CM resigns in last 6 months - Daily Post Punjabi
Post Views: 61