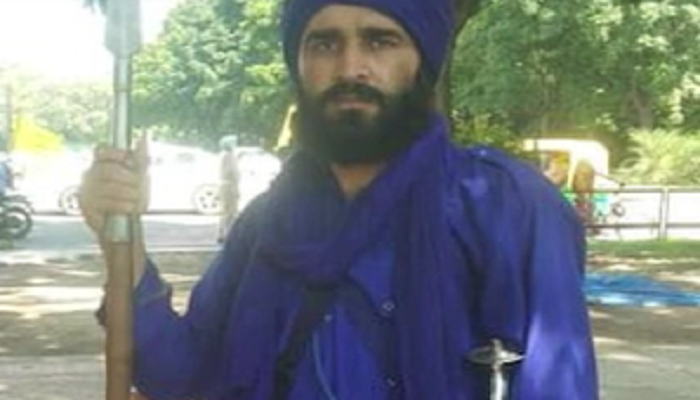 Nihang Naveen Sandhu has been arrested on charges of assaulting a laborer and breaking his leg at Singhu border. Sonipat police files FIR against Nihang I. R. Has also been recorded.

Earlier in the day, Nihang Naveen Sandhu, a member of Baba Aman Singh’s team, broke the leg of a laborer supplying chickens at the Singhu border in Haryana’s Sonipat district at around 11 am on Friday.

The laborer has been identified as Manoj Paswan, a resident of Bihar. Naveen Sandhu first asked Manoj Paswan for a rooster and when he refused to give it, he beat him with sticks and broke his leg. Nihang laborer Manoj Paswan was admitted to Sonipat Hospital after breaking his leg. Two videos of Manoj Paswan have also surfaced. The first video is 39 seconds long, which is from Singhu Border. Sitting on the ground, Manoj is saying that he was going to supply chickens to Kundli and nearby villages in his rickshaw.

On the way, a Nihang asked him for a rooster. When he said he couldn’t do it because he had got the supply by counting and had to come back and give an account, Nihang started beating him. In the second video of 44 seconds, Manoj lying on a stretcher in Sonipat Hospital is saying that I also took out a slip with the number of chickens from my pocket and showed it to Nihang. While taking out the slip, the beedi in my pocket came in my hand, which Nihang cursed and said that you are drinking beedi. When I said that everyone drinks, I also drink but I don’t drink here, so he beat me again.

Manoj Paswan works for Satyawan, who runs a chicken shop at Kundli Border. Satyawan said that Manoj was accompanied by another boy on the rickshaw, Nihang also beat him but he somehow escaped and informed about the incident. He then rushed to the spot and with the help of the farmers present there caught Nihang Naveen. Satyawan claimed that Naveen Sandhu had also tried to snatch the rooster.

The post Nihang arrested for assaulting a laborer at Singhu border and breaking his leg appeared first on Daily Post Punjabi.