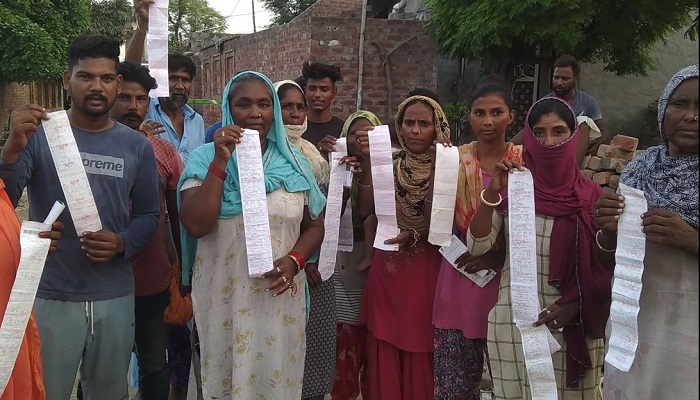 Home News Latest news Residents of the mohalla received a bill of Rs. 50,000 each for a fan and a light bulb.

Various promises, claims and guarantees have been made by the political parties to the people regarding the forthcoming Assembly elections in Punjab, but it has been 75 years since India became independent and the people of the country still They are forced to live a hellish life, an example of which is found in Mohalla Ram Nagar Basti in Sangrur district, where only a light bulb and a fan bill of Rs 50,000 have been sent by the power department to the slum dwellers.

The power department has sent bills ranging from Rs 15,000 to Rs 50,000 to the people living in Ramnagar Basti of Sangrur, while people say that they are living on only one bulb and one fan. Are The condition of the mohalla is so bad that there are no paved streets and no paved drains. And the life of the residents of the mohalla is full of hell. The residents of this Mohalla of Ramnagar Basti have never received any scheme from the Punjab Government or the Union Government but various political leaders of the Union Government or the Punjab Government keep on making big promises on their behalf to the common man.

D. S. Not Patwalia, Anmol Ratan Sidhu could be Punjab's new Advocate General, yet to be formally a...
All Universities To Be Developed As Joint Centers Of Education To Implement Quality Reforms - Pargat...
Now the anti-Captain faction is working on a new strategy! Sidhu held another meeting with the Mini...
Vote politics: BJP trying to win Punjab assembly elections with the help of Dera supporters
Post Views: 142