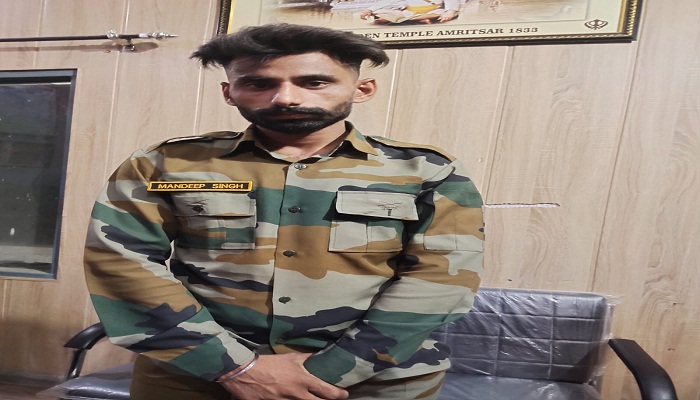 Mamdot: The young man found it so expensive to go to the fair to show the folly to the people that he was caught by BSF personnel and handed over to Mamdot police, after which he will now have to travel to jail. A case was registered against the arrested youth for violating government orders prohibiting him from wearing army uniform during preliminary interrogation. On the other hand, under the watchful eye of the security personnel, the matter of approaching the border wearing a banned army uniform at the fair at Zero Line is being closely watched by all the security agencies.

BSF 29 in the complaint lodged with the police. Sub-Inspector Kashish Hauldar of SL Wala said that a fair was held at the tomb of Pir Baba on International Zero Line yesterday in which Mandeep Singh son of Jagjit Singh resident of Ali K (Police Station Phool) District Bathinda Army uniform He was walking around when he was apprehended by the jawans on suspicion. After a preliminary interrogation by the BSF, the youth was handed over to the Mamdot police station. The arrested youth said that he came to know that there was a fair at the border and got in the way to fulfill his hobby of wearing army uniform.

Police Station Chief Ins. Gurpreet Singh said that the case of this young man arriving near the border in an army uniform was being closely monitored. He said that further action was being taken against the youth for violating the restraining order regarding wearing of army uniform.

Farmers of different villages of Mansa were forced to carry standing crop in their fields
Punjab Agriculture Department approves about 31,000 machines for paddy straw management
Shaheed Manjit Singh will be cremated today with official honors
One week notice to parking contractors, action will be taken if new changes are not implemented
Post Views: 43