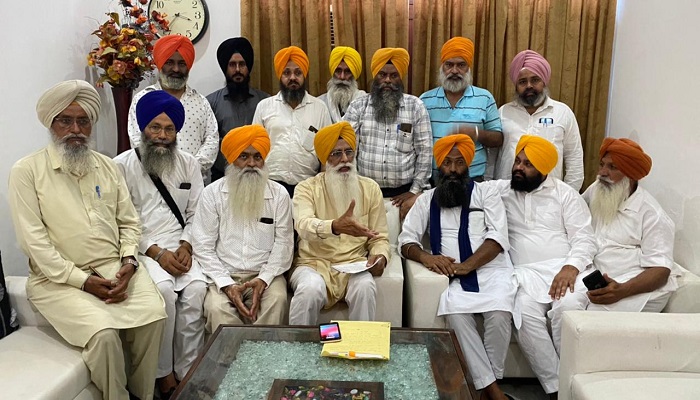 Ferozepur: Punjab has been the target of the Center since independence. The ruling Congress or the BJP in Delhi has branded the Sikhs and the people fighting for the rights of the Punjab as terrorists, separatists.

It is unfortunate that after the Captain, the newly appointed Congress Chief Minister Charanjit Singh Channy suddenly woke up to meet Amit Shah and after receiving the statement that he had come to request Amit Shah to seal the borders of Punjab. Shortly afterwards, Tughlaq’s decree came to light that the BSF, which is responsible for security at the country’s borders, has been given the authority to make arrests, searches and seizures in an area of ​​50 km along the Punjab border.

This action has exposed the secret alliance of Congress captain and current Chief Minister Channy with the BJP, which is very unfortunate for Punjab. In particular, with this decision, the Sikhs will be targeted by the Center and then Punjab will be plunged into the abyss.

These views were expressed by Bhai Gurcharan Singh Grewal, Chief Servant of the Sikh Students Federation and a member of the Shiromani Committee, while addressing a meeting of Federation of Frontier Workers at Ferozepur.

Bhai Grewal said that BJP was increasing its direct intervention in Punjab by making Congress its ally as it did not give up on its intention to impose President’s rule in Punjab. The country’s NIA has already cracked down on smuggling from Pakistan. Clumsy efforts are being made to suppress and eliminate the minority by setting up agencies like the Investigations.

Punjab is currently going through a very critical period. The state is going through a major economic and managerial crisis due to the incompetence of the Congress state government and the beginning of the peasant struggle is the people of Punjab, especially the Sikh Center, fighting or dying.

At such a time when the Center tried to create an atmosphere of terror with Punjab through its forces, the situation would get out of control again. The people of Punjab will be forced to go through another bad period.

Will the Guru be out? Now even CM Channi has not reached Patiala to celebrate
Great news! In Punjab Police, a police constable's vehicle hit two girls, killing one on the spot
Hockey players deprived of facilities in Captain's home district, have not been to Astroturf for fou...
Congress leader Gursimran Singh Mand receives death threats, seeks security
Post Views: 37