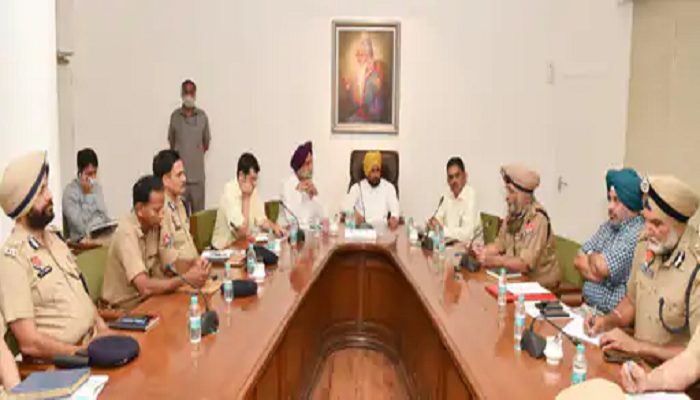 One youth was killed and two others were seriously injured in a firing incident at Ajit Road in Bathinda yesterday. CM Channy took stern notice of the incident. Yes. P. He also met police officials and gave strict instructions to restore law and order in the state.

The Chief Minister categorically said that the police should develop a proper system to identify the drug traffickers who are making our youth drug addicts. In his first meeting with the police officers after assuming office as the Chief Minister, Channy asked the officers to discharge their duties with dedication, honesty and professional commitment so that the people would feel proud.

In Bathinda, more than 10 armed men opened fire on two youths sitting in a park. Hassan, a resident of Mahima Makwana, died on the spot in the attack. The assailants broke the limbs of Buta Singh, a resident of Jandawala village, by firing several shots at him and hitting him with hockey sticks. CCTV footage of the incident has also come to light. At the same time, the people present there said that Hassan Singh, a resident of Ganda Wala, was sitting with his acquaintance Buta Singh Mahima Makwana in the park at 6th Street on Ajit Road in the city. At the same time, more than 10 armed youths arrived in the park. The first assailants opened fire as they approached Hassan, who was sitting in the park.

Hasan Singh was shot dead on the spot. At the same time, outside the park, the assailants surrounded Buta Singh, who was fleeing, on the road and severely beat him. He was shot in the legs and then severely beaten on the head, legs and arms with hockey sticks and weapons. After the crowd had gathered, they fled in a car. Buta Singh has been admitted to the hospital in critical condition.

It may be recalled that the President of Shiromani Akali Dal Mr. Sukhbir Badal had attacked the Chief Minister Mr. Channi over this blatant firing of gangsters. Mr. Badal asked Mr. Channy to stop taking photographs and review the law and order situation in the state and eradicate the gangster culture which has taken another life in Bathinda.

Personal staff of new ministers of Punjab posted, read list
The government does not want to close schools in Punjab yet, the Education Minister said - the situa...
Punjab Government insists on transfers, transfers of 12 IAS and 5 PCS officers
Beautician dies in tragic accident in Jalandhar, would go to Canada a few days later
Post Views: 67